To share your memory on the wall of Orest Romaniuk, sign in using one of the following options:

It is with deep sadness the family of Orest M. Romaniuk announces his passing on December 22, 2020 at the age of 76 years.

It is with deep sadness the family of Orest M. Romaniuk announces his passing on December 22, 2020 at the age of 76 years.

Orest was born and raised near Rama, SK and attended school in Rama. He left school to work for his farming uncle and aunt near Swan River, MB. He then worked for his sister and brother-in-law’s towing business in Winnipeg, MB. Orest joined the Canadian National Railway with his brother Dan in 1967. He worked as a painter, carpenter, bridge man, and then became a B&B (Buildings and Bridges) foreman in 1973. He traveled a lot working at numerous CN locations from western MB, all across SK to eastern AB. Orest and Sylvia lived in Regina and Pilot Butte and eventually settled in Allan, SK in 1972 where they raised their three children.

Orest retired from the CNR in 1999 at the age of 55. Orest was a dedicated member of Allan Elks Lodge #546 for approximately 30 years and served as exalted ruler for two years. Not one to sit idle for long, he started working for Sask. Housing Authority in Allan doing building and yard maintenance until his failing health forced him to retire.

Orest enjoyed hunting (deer and duck) and fishing at Blackstrap and Good Spirit Lake. He also loved bowling, carpentry, cutting grass and just being outdoors. He loved to socialize and reminisce with family and friends about his years growing up on the farm and the jobs at which he worked. He will be dearly missed.

Orest was predeceased by his parents Wasyl and Anne (Krawetz) of Rama, SK; his brother Mike (Joanne) from Duffield, AB; his brother Taras ‘Terry', sister-in-law Pat from Winnipeg, MB; and his sister Lydia ‘Leona', brother-in-law Paul, Fransishyn from Canora, SK.

Left to cherish his memory are his wife of 51 years, Sylvia (Chalus); his son Maurice (Karen) from Almonte, ON; his daughter Lorrianne (Jay) Tingley and grandson, Gabriel from Saskatoon, SK; and his son Myles from Allan, SK and grandchildren Westley and Sierra from Saskatoon, SK. He is fondly remembered by his sister Mary Scodellaro and Emily Stratychuk, both from Winnipeg, MB; and his brother Dan (Linda) from Armstrong, BC. Also numerous loving nieces, nephews cousins and in-laws.

Due to COVID-19 Restrictions a Private Family Service is to be held at a later date. For those so wishing, in lieu of flowers, memorial donations to St. Paul’s Hospital Foundation would be appreciated. For online condolences, tributes or donations, please visit https://fotheringham-mcdougall.com
Read Less

To plant a memorial tree in honor of Orest Romaniuk, please visit our Heartfelt Sympathies Store.

There are no events scheduled. You can still show your support by sending flowers directly to the family, or planting a memorial tree in memory of Orest Romaniuk.
Plant a Tree

We encourage you to share your most beloved memories of Orest Romaniuk here, so that the family and other loved ones can always see it. You can upload cherished photographs, or share your favorite stories, and can even comment on those shared by others.

Posted Dec 30, 2020 at 02:03pm
May Jesus wrap His loving arms around you, Sylvia and your family, as you remember and mourn Orest’s passing.May He give you peace. You guys were the first neighbors we got to know when we moved to Allan in 1977. Appreciated your friendship.
Comment Share
Share via:
HH

Posted Dec 29, 2020 at 06:33pm
Sylvia and family, we are so sorry to hear about Orest. Sending our thoughts and prayers during this difficult time.
Comment Share
Share via:
BF

Our sincere sympathy to you all on Orest's passing. We will always remember Orest for helping us with carpentry jobs and especially building a custom dog house for one of our large dogs. Bowling was a hoot as we travelled around the province bowling with the Elks and Royal Purple in the various tournaments. He will surely be missed by all

Posted Dec 24, 2020 at 05:06pm
To Sylvia and the family, we are so sorry to hear of Orest's death! He was a great fellow and a wonderful, friendly neighbour!
Comment Share
Share via: 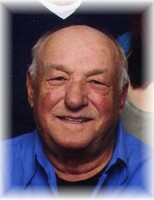