To share your memory on the wall of Eric Jeschke, sign in using one of the following options:

Eric grew up knowing the yip of the coyote, the croak of the crane, and the melodic... Read More
Eric H. Jeschke, son of David and Alvina (Penner) Jeschke, late of Nokomis, SK, and Niagara-on-the Lake, ON, died on February 13, 2021 at the age of 95.

Eric grew up knowing the yip of the coyote, the croak of the crane, and the melodic repertoire of the meadowlark, on a farm south of Nokomis, SK. He attended high school in Nokomis and Niagara-on-the Lake, ON. His quest for knowledge led him to the United States in 1946 where he was educated at several schools including North American Divinity School, Rochester, NY; University of Rochester and Eastman School of Music, Rochester, NY; William Jewell College, Liberty, MO (BA degree in History) and the University of Minnesota in Minneapolis, MN (Master’s degree in Creative Writing).

Eric was a perennial graduate student. It was at the University of Minnesota’s Medical School, where he met his future wife, Dorothy Burke of Westminster, MD, who was also working on her Master’s degree (Nursing Education).

He left the comfort of campus life to join the work world in Seattle, WA as Publicity and Public Relations Director of the Seattle Symphony Orchestra. As such, he met with the musical artists in vogue at the time, conducting interviews for media with such notables as Isaac Stern, Rudolf Serkin, and Andreas Segovia, but his favourite was an extended interview with Glenn Gould about his (Gould’s) trip to Leningrad, Russia.

Music may be the “food of love”, but symphonic organizations are notoriously frugal insofar as salary is concerned. Consequently, Eric left the symphony for the advertising field where he was employed with McCann Erickson, an agency with offices worldwide. Some of his advertising accounts included Seattle First National Bank, KOMO-TV, and Coca-Cola.

Eric left the advertising “rat race” years later to return to and acquire the family farm near Nokomis. Following his retirement from farming, he took up vegetable gardening as his major hobby, specializing in Atlantic Giant pumpkins.

Eric was a gifted tenor and a paid soloist in various churches in the U.S. He sang with the Rochester Philharmonic’s Oratorio Society and as a member of the Canterbury Players of Minneapolis, was their lead soloist in many Gilbert and Sullivan operas. He also sang with the Seattle Chorale with Milton Katims, conductor of the Seattle Symphony Orchestra.

In Saskatchewan, Eric was active in the Last Mountain Music Festival competitions. In Regina’s Music Festival, he was awarded first place provincially in the Lieder category in 1982. At intervals, over the years, he produced three commercially viable tenor solo albums: “Eric Jeschke Sings Sacred and Secular Songs”, “Carols of Christmas”, and “Favorite Love Songs”.

Eric and Dorothy traveled extensively upon retirement including three trips to Europe and winter weeks “down south” especially to Las Vegas and Laughlin, NV on the blue Colorado River, and later gambling with French francs at Monte Carlo in Monaco. He never saw a slot machine he didn’t like. Consistently and uncannily, he hit lesser jackpots. The Big One always eluded him.

Not one to bear fools gladly, Eric’s sense of humor and acerbic wit were congenial to all. To him, the old cliché, “He didn’t have an enemy in the world” was mere malarky, and those who believed this bromide never lived life to the fullest. “Seize the day!” was his contention.

Eric was predeceased by his father David, mother Alvina, brothers Harry, William, Alfred, sister Erna and wife Dorothy. He leaves to remember him fondly his daughters, Patricia Simpson (David) of Bowmanville, ON; Catherine (Luke) of Sarnia, ON and three grandchildren, Scott, Steven, and Jessica. Brothers who survive are Arnold (Jean) of Dallas, OR and Dr. Ronald Jeschke of Costa Rica.

At Eric’s request, there will be no funeral. A graveside interment will be held at a later date. If friends so desire, donations can be made to the Parkinson’s Foundation to honour both Eric and Dorothy’s memory.

We encourage you to share your most beloved memories of Eric here, so that the family and other loved ones can always see it. You can upload cherished photographs, or share your favorite stories, and can even comment on those shared by others.

Posted Feb 24, 2021 at 01:00am
Wow, I didn't know Uncle Eric was so accomplished! Thank you for the well-written and informative story of your father.
What I remember most about Uncle Eric is: when he would roll his R's; when he'd say "A thing of beauty is a joy forever" and when he would call up to us kids "You duffers settle down up there" which would send us into fits of laughter. I am so glad to have had a few recent phone conversations with him. Even though he was not in the best of health, he still maintained his sense of humour.
My thoughts are with you.
Rhonda Jeschke

Posted Feb 20, 2021 at 11:48am
Dear Pat and Kathy. I absolutely loved reading the story of your father. It sounds like he had quite the education and the experiences throughout his 95 years. You must be so proud as I know he was of both of you. Beautiful photos. I have seen many of your Dad with his prize pumpkins. A wonderful life! My condolences to you and your families.
Love, Diane. & John Prodenchuk
Comment Share
Share via:
LM

Posted Feb 18, 2021 at 04:55pm
So sorry for your loss, will miss seeing Eric around town and chatting with him. He had so many stories and was always quick with a come back line. Always so difficult to lose a parent❤
Comment Share
Share via:
CM

Posted Feb 17, 2021 at 01:03pm
Dear Cathy, I was so very sorry to learn of the loss of your father. He sounds like he was an amazing person and will be missed by all who knew him. Please know that I am keeping you and your family in my thoughts and prayers during this very sad time. Colleen McLean
Comment Share
Share via: 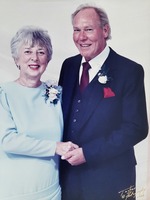 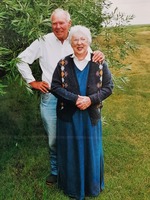 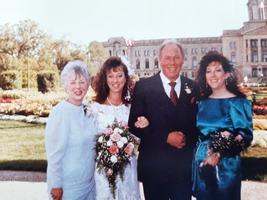