To share your memory on the wall of Anastasia Bauml, sign in using one of the following options:

Donations are being accepted for: Interlake Human Resources Corporation.

We encourage you to share your most beloved memories of Anastasia here, so that the family and other loved ones can always see it. You can upload cherished photographs, or share your favorite stories, and can even comment on those shared by others.

Posted Jan 08, 2021 at 10:20am
In loving memory of our Aunt, sister of our beloved Mother Christine. Rest In Peace as you fly with the Angels.

3 trees were planted in the memory of Anastasia Bauml

Posted Jan 12, 2021 at 04:23pm
Thank you Ann for everything you did for me. You treated me like family and I will cherish that for my lifetime. To the family I love you all and I’m sorry for your loss. Sandy White
Comment Share
Share via:
J

Posted Jan 09, 2021 at 03:32pm
James and family, I send to you my sincerest sympathy. May good memories help to ease your burden of sorrow.
Comment Share
Share via:
HS 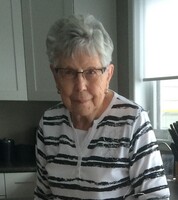