To share your memory on the wall of Arnold Felske, sign in using one of the following options:

To plant a memorial tree in honor of Arnold Felske, please visit our Heartfelt Sympathies Store.

There are no events scheduled. You can still show your support by sending flowers directly to the family, or planting a memorial tree in memory of Arnold Felske.
Plant a Tree

Donations are being accepted for: NOKOMIS HEALTH CENTRE FOUNDATION BOARD.

We encourage you to share your most beloved memories of Arnold Felske here, so that the family and other loved ones can always see it. You can upload cherished photographs, or share your favorite stories, and can even comment on those shared by others.

Posted Dec 08, 2020 at 04:35pm
Our heart felt condolences to the Felske.
I have many fond memories of Arnie. Growing up our parents visited, then Arnie was Ernest’s Best man at our wedding. We remained friends over the years. I will miss his many phone calls, especially on my Birthday
Margaret (Krell) Schroeder and family

Posted Dec 06, 2020 at 09:57pm
I (Ellen) was one of those country kids who was on the school bus before and after school. I am sure Arnie would say, I was one of the best behaved! Neil and I offer our condolences to the Felske family. Our thoughts are with you. Hold your memories close.
Comment Share
Share via:
DH

Posted Dec 01, 2020 at 07:05pm
Sincere Condolences to the Felske Family!! Arnold was such a kind man and always had time for a chat!! He will surely be missed
Comment Share
Share via: 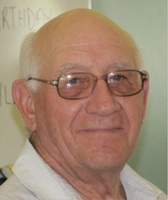